Gus has his own band called Firewind (released so far 3 singles, 5 studio albums and one live album) but he also played in the bands Mystic Prophecy, Nightrage, Arch Enemy and Dream Evil.

All his releases came through non Greek record labels (I am not surprised).

Although Heavy Metal is not my cup of tea, I am sure you will agree that playing with Ozzy is something really great for a musician, especially for one that comes from Greece.

Posted by panole8riambos on October 26, 2009 in Heavy Metal

I found the following “vids”…well, these are not realy videos , on YouTube.

So, if you want to listen to what the following band sounded like…there you go.

You can read more about Proxies, here.

You can read about Brush here.

This one is a cover version of Wasted Youth’s “Do The Caveman”.  Greek readers, click here.

Posted by panole8riambos on October 21, 2009 in Days Of Future Passed

One more Greek band that is little known even to the Greek underground audience is this one.

The Lesbians released a self-titled 12” EP in 1986, influenced by Liverpudlian bands such as the Teardrop Explodes.

Formed during the early 80’s, the new wave/synth-pop duet Statues In Motion managed to release one selftitled LP  in 1983.

The information is yet very limited and the album is very-very rare nowadays, although it was released through a major Greek label.

So, any additional infos, are welcomed.

Era Of The Rats

The Man In Black

When the Italian label Deacadance Records released the compilation album “Decadance Compilation vol 1.”, in January 2002, Nexus participated with the track “Walking On Thin Ice” from their second album, “Cybernaut”.

“Cybernaut” was released during 2001, about 6 months after the release of “6” and guitar player Lefteris Strouggaris would be recording for the last time with the band.

With the band on the road, the new release found distribution all across Europe and UK and soon it would be sold out proving right the decision of the band to use English lyrics.

Reviews of the foreign press were very flattering such as this one from the Scottish “CD Services” (taken from the band’s MySpace profile): “…Haven’t heard an album like this for a long time since it recreates  the cream of ’80’s industrial songwriting and arranging to a tee, with plenty of songs that hearken back to the beat-laden days of 23 Skidoo, Portion Control, early FLA, 400 Blows and the like, with a set of suitably powerful, dynamic and excellently produced/arranged songs, all improved even further by a distinct Sisters Of Mercy (“Floodland“-era) style vocal, with a majority of the songs built around acres of synths, hard rhythms and samples…“

When Nexus and Strouggaris parted ways, the three remaining band members decided to go on using only session guitar players.

Some of the inner sleeves of the compilation “Outsiders“. 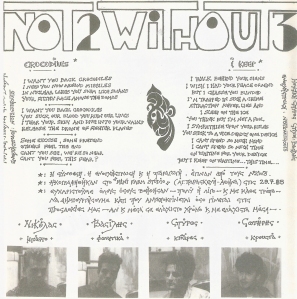 Posted by panole8riambos on October 9, 2009 in New Wave / Dark Wave

I found that video of the post-punk band Split Image performing on stage at Playhouse Gotique #4.

They were formed in 1981 at Corfu by singer/guitar player George Scordilis, bass player Costas Veronikis and drummer Alexandros Mesimeris.

It looks like it was the right time for Skordilis to make some additions to his music, so in 1984 keyboard player Giannis Charalambidis (former member of the punk rock band Anypofori) joined the band.

They supported Greek bands such as, X-Mandarina Duck and Winter Water Colours.

Split Image’s sound was always carrying a haunted atmosphere, with Gothic soundscapes but they were also flirting a lot with experimental music elements.

They joined the AETA ”union” of musicians  and appeared on the legendary 1st AETA festival in 1987.

In 1989 Skordilis put the band on hold and during the 90’s, along with with Charalambidis, he formed the band Soundmachine.

Although the band has been active all these years, they never had any official release.

Rumor has it that they are signed now to Dead Scarlet Records but nothing is mentioned on this label’s site yet.

Posted by panole8riambos on October 2, 2009 in New Wave / Dark Wave

Posted by panole8riambos on October 1, 2009 in Concerts / Performances